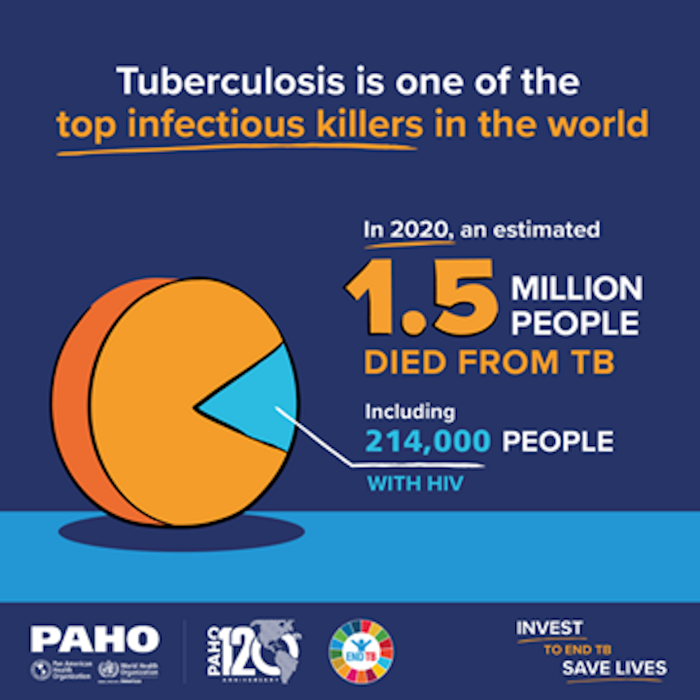 TB is a serious health threat, especially for people living with HIV

Each year, the world commemorates World Tuberculosis (TB) Day on March 24 to raise public awareness about the devastating health, social and economic consequences of TB, and to step up efforts to end the global TB epidemic. This is also a day to remember that the global burden of TB remains enormous, particularly among people with HIV, among whom TB is the leading cause of death, worldwide. The date marks the day in 1882 when Dr Robert Koch announced that he had discovered the bacterium that causes TB, which opened the way towards diagnosing and curing this disease.

On this very important day, let us take time and reflect on the relationship between HIV and TB and perhaps scale up our programmes to reduce the burden of TB among People Living with HIV (PLHIV).

TB remains one of the world’s deadliest infectious killers. Each day, over 4100 people lose their lives to TB and close to 28,000 people fall ill with this preventable and curable disease. Global efforts to combat TB have saved an estimated 66 million lives since the year 2000. However, the COVID-19 pandemic has reversed years of progress made in the fight to end TB. For the first time in over a decade, TB deaths increased in 2020.

The theme for World TB Day 2022 - ‘Invest to End TB. Save Lives.’ –conveys the urgent need to invest resources to ramp up the fight against TB and achieve the commitments to end TB made by global leaders. This is especially critical in the context of the COVID-19 pandemic that has put End TB progress at risk, and to ensure equitable access to prevention and care in line with WHO’s drive towards achieving Universal Health Coverage.

Corelation between HIV and TB

People living with HIV are 15-22 times more likely to develop TB than persons without. TB is the most common presenting illness among people living with HIV (PLHIV), including among those taking antiretroviral treatment, and it is the major cause of HIV-related deaths. Tuberculosis remains a serious concern for people living with HIV. That’s because a dangerous synergy exists between HIV and TB, such that people who have a suppressed immune system due to HIV infection are much more likely to develop active TB disease if they are exposed to the TB bacteria. Furthermore, active TB infection appears to increase HIV replication among co-infected persons. Therefore, the populations of people who are infected with these two pathogens often overlap. As a historical leader in the field of HIV, Dr. Jim Curran once observed: “HIV and TB hang out together and they are a bad influence on each other!”

In addition, while TB is curable with proper treatment, erratic or improper treatment can lead to drug resistance; one of the most serious problems facing people living with HIV who are coinfected with TB. Multidrug-resistant TB (MDR TB) is extremely difficult to treat and potentially fatal form of TB that is resistant to at least two of the best anti-TB drugs, isoniazid and rifampin. In addition, Extensively Drug-Resistant Tuberculosis (XDR TB) is rare type of MDR TB that is resistant to both the most powerful first-line drugs as well as to one of three second-line drugs. People living with HIV are at greater risk of dying of MDR TB and XDR TB.

If you are an individual living with HIV, be sure to talk to your healthcare provider about tuberculosis and make sure you’ve been tested for TB. The Ministry of Health  recommends that all people who are newly diagnosed with HIV, should be tested for TB as soon as possible, regardless of their TB risk category. In addition, people living with HIV who remain in a “high risk” category for repeated or ongoing TB exposure should be tested annually to find out if they have latent TB infection (LTBI). This includes individuals who have been incarcerated, those who live in group settings such as shelters or rehabilitation facilities, people who are active drug users, and those who have other risk factors for TB. People who are HIV-positive and who have a positive diagnostic test for LTBI should undergo additional clinical tests to rule out active TB disease.

HIV/AIDS, and Tuberculosis dual epidemic is one of the major health challenges faced by Eswatini. Despite these challenges, the country has made tremendous efforts to reduce the burden of TB among PLHIV through the implementation of TB infection prevention and control measures, TB screening at all patient contact points, increasing access to TB diagnostic services including transportation of sputum samples through the national sample transportation network system, treatment of latent TB amongst PLHIV and early provision of anti-TB treatment among those diagnosed with TB.

The country is also making efforts to decrease the burden of HIV among patients diagnosed with TB through implementing provider initiated HIV testing and counselling services, HIV infection preventive services and providing cotrimoxazole prophylaxis and ART to those diagnosed HIV positive. Despite being the major cause of HIV-related mortality, TB requires much more attention within the HIV response. Concerted efforts are needed by all parties to end deaths among people living with HIV from this preventable and curable disease. Advocacy plays a crucial role in mainstreaming TB onto the HIV agenda and vice versa, and for disseminating the latest evidence and policy.