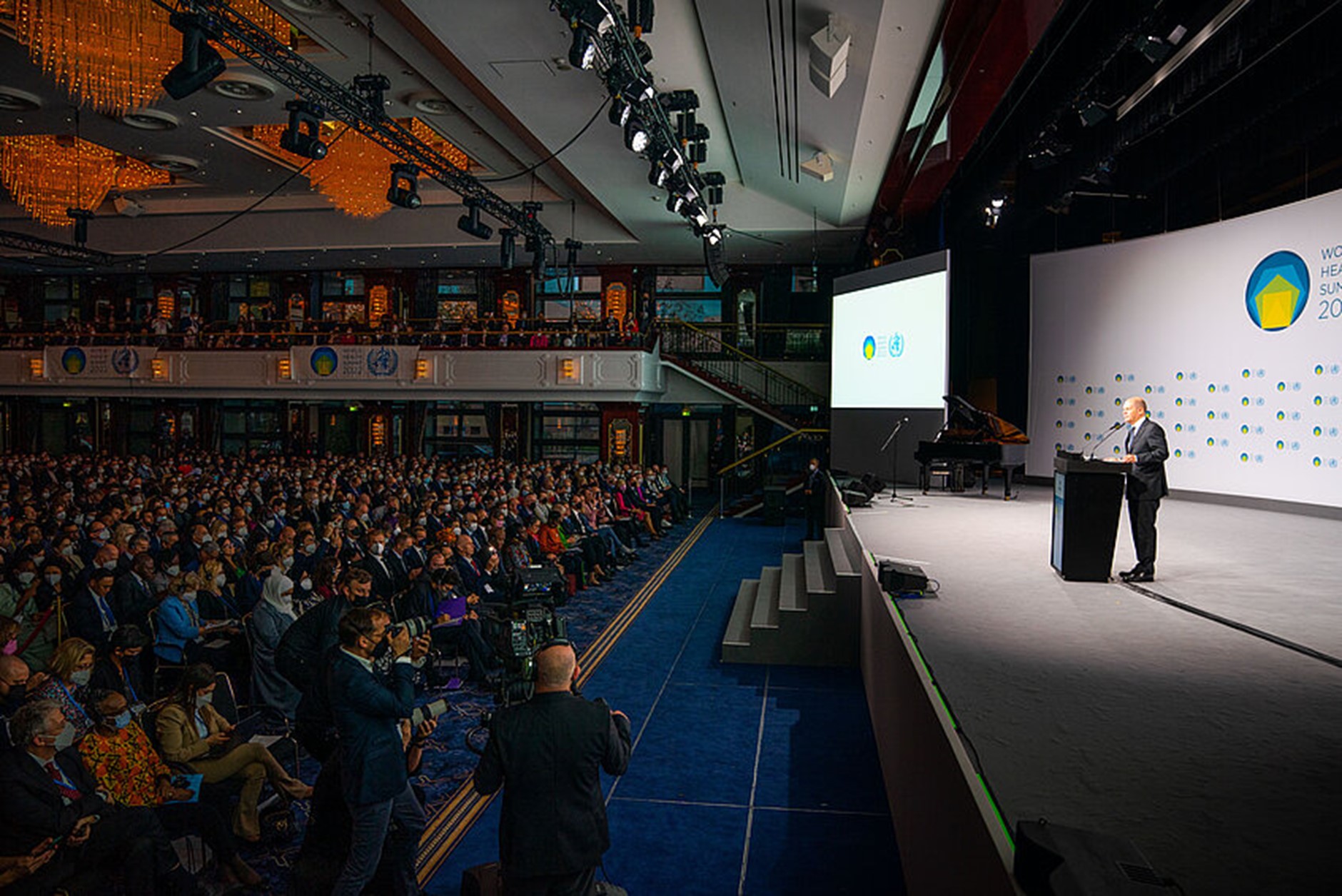 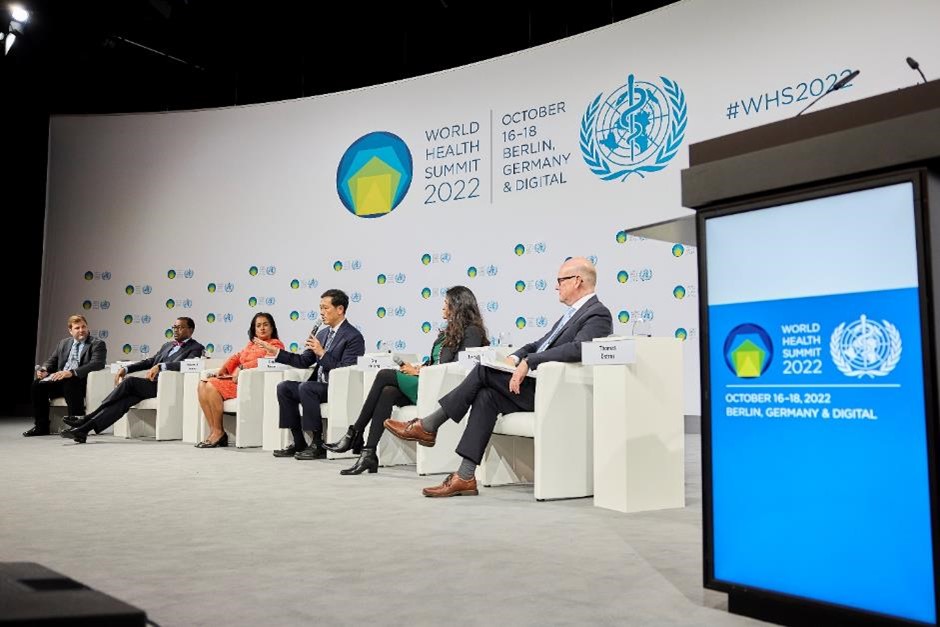 The World Health Summit (WHS) 2022, organized jointly with the World Health Organization (WHO) for the first time, is considered the world's leading meeting on global health. The summit held in Germany, Berlin from 16th to 18th October aimed to stimulate innovative solutions to health challenges, foster global health as a key political issue and promote a global health conversation in the spirit of the UN Sustainable Development Goals.

WHS and WHO are both dedicated to the well-being of all people. To give everyone everywhere the chance to live a healthy life is a global effort, and the key to achieve better health for all lies in collaboration and open dialogue, guided by science. This is what WHS 2022 stands for. The aim of the joint World Health Summit 2022 was to create synergies and combine forces for global health development by engaging all relevant global health leaders and stakeholders from all sectors in all regions of the world.

WHS 2022 strengthens exchange, stimulates innovative solutions to health challenges, fosters global health as a key political issue and promotes the global health debate in the spirit of the UN Sustainable Development Goals: SDG 17 “Partnership for the Goals”. This year’s World Health Summit focused on “Making the Choice for Health” by reflecting on the most pressing topics.

The World Health Summit 2022 ended with clear demands after three days with 404 speakers and 61 different sessions. The leading international meeting for global health was jointly organized together with the World Health Organization (WHO). Around 60,000 participants worldwide took part online via the World Health Summit and WHO channels. More than 4,100 participants from 141 countries were on site in Berlin. Over 30 ministers from around the world were among the speakers. There were more women speakers than men speakers: 203 of the speakers were women, 201 were men.

The opening ceremony on Sunday, October 16, was followed via livestream around the world by more than 40,000 participants and by 2,500 people on-site in Berlin. The last day focused on the Polio Pledging Event and the final session of the World Health Summit 2022. The Global Polio Eradication Initiative announced pledges of $2.6 billion to eradicate polio at the summit. “No place is safe until polio has been eradicated everywhere”, stated Svenja Schulze, Federal Minister for Economic Cooperation and Development. “We now have a realistic chance to eradicate polio completely, and we want to jointly seize that chance.”

"We are all acutely aware of the multiple overlapping crises around the world that are causing preventable death and disease, and depriving people of access to the health services they need," said Tedros Adhanom Ghebreyesus, WHO Director-General. "Certainly they are many, they are large, and they are complex. But they are not insurmountable. This year's World Health Summit has been a powerful demonstration of the ever-increasing energy and commitment to meeting these challenges and overcoming them." “During the first joint World Health Summit with WHO, we witnessed an exceptional energy and commitment towards our goal of Making Global Health a Political Choice”, stated World Health Summit President Axel Pries. “I urge all decision-makers worldwide to take this decision and ensure a healthy life for all on a healthy planet.“ On the agenda of the World Health Summit 2022 were topics like climate change and health, pandemic preparedness, food security, digital transformation, sustainable health systems, investments in health and well-being, and the role of the G7 and G20 in global health.

On the last day of the summit, global leaders confirmed US$ 2.6 billion in funding toward the Global Polio Eradication Initiative’s (GPEI) 2022-2026 Strategy to end polio at a pledging moment co-hosted by Germany’s Federal Ministry for Economic Cooperation and Development (BMZ) at the World Health Summit in Berlin. The funding will support global efforts to overcome the final hurdles to polio eradication, vaccinate 370 million children annually over the next five years and continue disease surveillance across 50 countries. “No place is safe until polio has been eradicated everywhere. As long as the virus still exists somewhere in the world, it can spread – including in our own country.

We now have a realistic chance to eradicate polio completely, and we want to jointly seize that chance,” said Svenja Schulze, Federal Minister for Economic Cooperation and Development, Germany. “Germany will remain a strong and committed partner in the global fight against polio. This year, it is providing EUR 35 million for this cause. And next year we plan to further strengthen our efforts and support GPEI with EUR 37 million – pending parliamentary approval. By supporting the GPEI, we are also strengthening national health systems. That leads to healthier societies, far beyond the polio response.” Wild poliovirus is endemic in just two countries – Pakistan and Afghanistan. However, after just six cases were recorded in 2021, 29 cases have been recorded so far this year, including a small number of new detections in southeast Africa linked to a strain originating in Pakistan.

Additionally, outbreaks of cVDPV, variants of the poliovirus that can emerge in places where not enough people have been immunized, continue to spread across parts of Africa, Asia and Europe, with new outbreaks detected in the United States, Israel and the United Kingdom in recent months. “The new detections of polio this year in previously polio-free countries are a stark reminder that if we do not deliver our goal of ending polio everywhere, it may resurge globally,” said Dr. Tedros Adhanom Ghebreyesus, WHO Director-General. “We are grateful for donors’ new and continued support for eradication, but there is further work to do to fully fund the 2022-2026 Strategy. We must remember the significant challenges we have overcome to get this far against polio, stay the course and finish the job once and for all.” At a challenging time for countries around the world, governments and partners have stepped forward to demonstrate their collective resolve to eradicate the second human disease ever.

"Children deserve to live in a polio-free world, but as we have seen this year with painful clarity, until we reach every community and vaccinate every child, the threat of polio will persist," said UNICEF Executive Director Catherine Russell. "UNICEF is grateful for the generosity of our donors and the pledges made today, which will help us finish the job of eradicating polio.  When we invest in immunization and health systems, we are investing in a safer, healthier future for everyone, everywhere.”