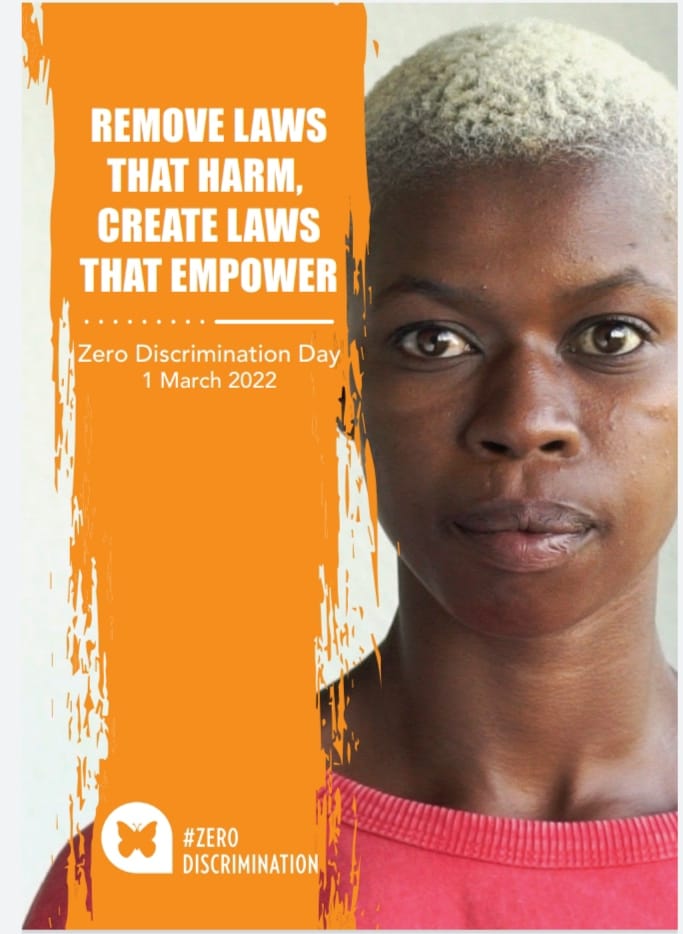 This year on 1st March 2022, Zero Discrimination Day is celebrated under the theme “Remove laws that harm, create laws that empower”, where UNAIDS is highlighting the urgent need to take action against discriminatory laws.

In many countries, laws result in people being treated differently, excluded from essential services or being subject to undue restrictions on how they live their lives, simply because of who they are, what they do or who they love. Such laws are discriminatory—they deny human rights and fundamental freedoms. States have a moral and legal obligation to remove discriminatory laws and to enact laws that protect people from discrimination. Everyone has a responsibility to hold states accountable, call for change and contribute to efforts to remove discriminatory laws.

On Zero Discrimination Day, the Kingdom of Eswatini, together with UNAIDS, NERCHA, development partners, MOH, CSOs, FBOs, Private sector, communities and all players in the multisectoral response to HIV and AIDS, join the rest of the world in celebrating the right of everyone to live a full and productive life—and live it with dignity and free from discrimination.

What is HIV Stigma

HIV stigma refers to irrational or negative attitudes, beliefs, behaviours, and judgments towards people living with or at risk of HIV. It can negatively affect the health and well-being of people living with HIV by discouraging some individuals from learning their HIV status, accessing treatment, or staying in care. HIV stigma can also affect those at risk of HIV by discouraging them from seeking HIV prevention tools and testing, and from talking openly with their sex partners about safer sex options.

When we support people with HIV, we make it easier for them to lead healthy lives. Zero Discrimination Day highlights the role that each person plays in stopping HIV stigma and gives voice to people living with HIV, as well as their friends and family. Campaign participants share their stories and call on everyone to work together to stop HIV. Populations disproportionately affected by HIV are also often affected by stigma due to, among other things, their gender, sexual orientation, gender identity, race/ethnicity, drug use, or sex work. HIV stigma drives acts of discrimination in all sectors of society, including health care, education, the work place, the justice system, families, and communities.

If each of us commits to making positive changes in our families and communities, we can help end HIV stigma and work to stop HIV together.

Criminal law not an effective tool for addressing HIV

Global and local efforts to respond to HIV has seen tremendous decline in the number of new infections, as they are going down each year. The number of AIDS-related deaths has also reduced, despite other emerging pandemics like COVID-19 . However, many of the people left behind in the AIDS response are the hardest to reach, including people who are affected by stigma and marginalization and whose conduct is criminalized. These include those most likely to be exposed to HIV or to transmit it such as sex workers, men who have sex with men, transgender people or people who inject drugs, all referred to as key populations.

In many of these key populations prevalence remains very high, therefore, it is time to work harder to make sure that the AIDS response reaches everybody – including key populations – with appropriate services and support. They have partners and families and live and interact with society at large. Their vulnerability to HIV is everybody’s vulnerability, hence criminalizing the conduct of key populations drives them underground, reduces their access to services and increases risk-taking behaviour. Transforming government responses from punitive approaches to approaches based on sound public health rationales can, in contrast, have positive results. This shows that criminal law is rarely an effective tool for addressing HIV in key populations.

To address inequalities associated with Stigma and discrimination, we now have the Global AIDS Strategy (2021-2026) End Inequalities, End AIDS. The strategy uses an inequalities lens to close the gaps preventing progress to end AIDS. It further sets out bold new targets and polices to be reached by 2025 to propel new energy and commitment to ending AIDS. The strategy’s ambitious vision is for ending gender inequalities and realizing human rights, including the right to health, calling upon all partners and stakeholders in the HIV response in every country to transform unequal gender norms and end stigma and discrimination. In addition, the strategy is based on human rights, gender equality and dignity, free from stigma and discrimination for all people living with and affected by HIV, and is the result of extensive analysis of HIV data and an inclusive process of consultation with countries, communities and partners. The strategy puts people at the centre and aims to unite all countries, communities and partners across and beyond the HIV response, to take prioritized action to transform health and life outcomes for people living with and affected by HIV.

Let us be considerate when talking about HIV to avoid stigma

The words we use matter. Let us keep in mind that when talking about HIV, certain words and language may have a negative meaning for people at high risk for HIV or those who have HIV. We can do our part to stop HIV stigma by being intentional and thoughtful when choosing our words, and choosing to use supportive—rather than stigmatizing— language when talking about HIV. The first step is talking openly about it and addressing stigma head on. It is important to speak up and take action when you witness others behaving in ways that are stigmatizing. But it can be hard to know what to say or do. Many of us struggle with how best to address HIV stigma and discrimination when we experience it.

The HIV stigma index report, 2019 presents a picture of the current situation in terms of stigma and discrimination among people living with HIV in the Kingdom. The most common reported stigma and discrimination was being targets of discriminatory remarks by other people and being verbally harassed. People Living with HIV (PLHIV) mentioned that discriminatory remarks are through different phrases which portray PLHIV as being promiscuous, sick and unproductive. Despite, this derogatory remarks against them, PLHIV have developed internal resilience and the survey depicts that HIV related stigma and discrimination is experienced by fewer people. However, discriminatory attitudes and prejudice against PLHIV exist in communities and manifests through gossip during social gatherings. Disclosure of HIV status is difficult for PLHIV. This therefore presents the need for PLHIV, and HIV and AIDS programme implementors to plan, educate, raise awareness and implement HIV stigma sensitive programmes.